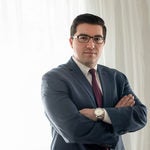 Matt has been an associate attorney with DeMichele & DeMichele, P.C. since 2011.

In 2018, he was recognized as a “Top Divorce & Family Attorney” by SJ Magazine based upon the votes of fellow New Jersey lawyers.

Matt graduated with a Juris Doctorate degree from the Rutgers School of Law-Camden in 2010. He was admitted to practice law in New Jersey in 2011 and the District of Columbia in 2012. Prior to joining DeMichele & DeMichele, P.C. as an associate attorney, he served as Law Clerk to the Honorable Nan S. Famular, J.S.C. of the New Jersey Superior Court, Chancery Division, Family Part in Camden County, for the 2010-2011 court term._

Matt was listed as a 2018 ‘top attorney' by South Jersey Magazine.

During his law school tenure, Matt served as Secretary of the Rutgers-Camden Chapter of the Federalist Society. He also successfully completed an eighteen-hour training program in mediation and conciliation skills through the Superior Court of New Jersey, Camden Vicinage in February 2008.

When he is not advocating on behalf of our clients, Matt is a force in New Jersey state politics, a sought-after public speaker, noted public policy commentator, and a leader in the Garden State's vibrant social media community. Among other honors, Matt was recently named a “rising star” by New Jersey's Gannett newspapers, his website Save Jersey was recognized by The Washington Post as one of the top state-based political websites in the United States, a top 100 millennial (#43) and top 100 political media member (#46) by InsiderNJ, and Matt was personally profiled by The Philadelphia Inquirer.

Matt has also served as a Continuing Legal Education (CLE) course panelist, helping education other attorneys on the intricacies of child support and municipal court issues.

Contact Matt Rooney today at (856) 546-1350 or by email at [email protected] to schedule your initial consultation.