Can divorcing N.J. spouses spy on each other with drones? 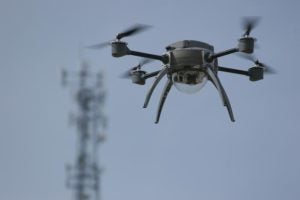 You may have seen this eyebrow-raising story over the last few days, but a North Pennsylvania couple made international news when the husband allegedly caught his wife in the act of adultery through the use of an unmanned aerial vehicle, more popularly known as a drone. The video has since gone viral on YouTube with millions of views; the man reportedly filed for divorce as a result. This isn't the only recent instance of technology changing the landscape of divorce litigation. Last year's massive date breach at the pro-adultery dating website AshleyMadison.com implicated a number of legal issues including how such revelations impact the divorce process. There's already a large body of case law in the realm of spousal wiretapping and e-mail access. On our side of the river a few years earlier, back in 2011, a New Jersey Appellate Court three-judge panel ruled that a Gloucester County husband accused of cheating had no right to privacy after his wife, at the advice of a retained private investigator, placed a GPS tracking device in the glove compartment of her husband's SUV. “There is no direct evidence in this record to establish that during the approximately 40 days the GPS was in the … glove compartment the device captured a movement of plaintiff into a secluded location that was not in public view, and, if so, that such information was passed along by Mrs. Villanova to (Leonard),” Appellate Judge Joseph Lisa explained. Whether drone spying would fly (pardon the pun) in a New Jersey family courtroom is highly questionable. Not only is the Federal Aviation Administration (FAA) cracking down on drone used for private espionage and generally, but it's also possible that using drones to spy on one's spouse, boyfriend or girlfriend could, in certain circumstances, even implicate New Jersey's broad domestic violence law (BTW- I've previously written about how attempting to get your spouse fired could be deemed an act of domestic violence). You could even potentially face a lawsuit for common law invasion of privacy, a civil matter, by flying a drone in the wrong place and at the wrong time. It's always better to think twice — and consult an attorney — before taking dramatic steps that could actually result in more harm than good for both you and your divorce case. Setting aside the legality of drone usage for a moment, employing drones in divorce cases might not help a divorcing spouse as much as he or she might think. Frankly, New Jersey is a ‘no fault' divorce state meaning that a divorcing couple need not go through the time, expense, and emotional torment of proving adultery to finalize their divorce. All that is typically necessary is for your to plead that you and your spouse experienced a breakdown of your marriage for more than six (6) months preceding filing for divorce and that there is no reasonable prospect of reconciliation. There are, however, narrow exceptions concerning the value of adultery-related evidence when marital assets are dissipated through the act of cheating. What's clear: the law is changing rapidly where technology is implicated.

If you or a loved one has questions regarding the New Jersey divorce process, especially any concerns relating to adultery, alimony, equitable distribution or related financial concerns and how New Jersey family courts handle those issues, please  contact the divorce attorneys at DeMichele and DeMichele. For a confidential consultation to discuss your situation with one of our New Jersey divorce attorneys, you can also call  (856) 546-1350. It's your future; don't leave everything to chance!