Do you have the right to remain silent when N.J. police pull you over?

It's such a controversial and poorly understood issue that there is currently a bill before the New Jersey legislature, sponsored by a Cape May County-based State Senator, designed to improve driver education pertaining to traffic stops. Can you remain silent when a police officer pulls your over? Or more to the point, ‘how silent' can you choose to be? The Fifth Amendment is, as ever, our starting point: No person shall be held to answer for a capital, or otherwise infamous crime, unless on a presentment or indictment of a Grand Jury, except in cases arising in the land or naval forces, or in the Militia, when in actual service in time of War or public danger; nor shall any person be subject for the same offence to be twice put in jeopardy of life or limb; nor shall be compelled in any criminal case to be a witness against himself, nor be deprived of life, liberty, or property, without due process of law; nor shall private property be taken for public use, without just compensation. [Emphasis added.] In 1966, the U.S. Supreme Court decision in  Miranda v. Arizona established that, whenever an individual is taken into police custody, he or she must be instructed as to the  Fifth Amendment right to abstain from making self-incriminating statements  before being questioned. 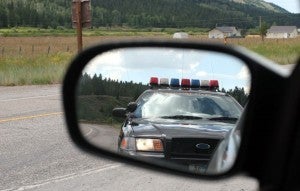 What about a traffic stop? In 1997, a New Jersey Appellate Court ruled in Smith v. Smith that “[t]he rights set forth in Miranda are not implicated when the detention and questioning is part of an investigatory procedure rather than a custodial interrogation, or where the restriction on a defendant's freedom is not of such significance as to compel the conclusion that his liberty is restrained.” You can guess where this is going. As a general matter, as explained in the 2000 State v. Hickman appellate case, the roadside questioning of a motorist detained in a routine traffic stop does not normally amount to a  “custodial interrogation” which would require the police to issue Miranda warnings. Consequently, a police officer is allowed to question a N.J. motorist about a broken tail light, cracked windshield or alleged scent of smell of marijuana without advising the motorist of his or her Miranda rights. But the question of whether you  have to be warned about the right to remain silent in most traffic stop situations is different from whether you need to actually answer questions. That's a separate inquiry. Your duty can be best described as one of cooperation (e.g. turning over your insurance card when asked by the officer). “Absent some reasonable suspicion, citizens are not responsible to engage in conversation with police officers,” Wayne Fisher, a Rutgers University criminal justice professor and former Newark police officer, recently told NJ Advance media. Still, Fisher added, “common sense might dictate (that you) just take a second and indicate to the officer you don't want to have any conversation.” Professor Fisher's analysis was generalized but offered in response to a high-profile 2015 New Jersey traffic incident in which a Philadelphia attorney was arrested for refusing to answer questions during a Warren County traffic stop:

The motorist subsequently filed a federal lawsuit as a result of what she believed to be a violation of her civil rights.

What's the bottom line? When you've been hit with traffic or criminal charges as a result of a New Jersey traffic stop, you'll need attorneys who can scrutinize the state's evidence, analyze possible defenses and zealously protect your rights when it matters most. This strategy includes examining whether your constitutional rights where violated at any stage of the traffic stop and, if applicable, subsequent arrest.

We're here to help you. If you or a loved one is facing traffic-related or criminal charges in a New Jersey municipal court,  contact the New Jersey experienced defense lawyers at  DeMichele & DeMichele today. We are here to defend the charges against you.  Contact us now for your confidential and free initial consultation. You can also reach us by telephone  (856) 546-1350. Don't just plead guilty and risk your future!